Everybody is bad at something.

I’m really bad at handyman stuff. I don’t know how to fix things or maintain things. Whenever something goes wrong with my car, or something breaks in the house, I feel totally lost. I feel overwhelmed when I have to take care of it. Like I’m out of my depth. I’m always afraid I’ll break it worse. Even if I take my car to the shop, or have someone come do the work for me at home, I feel embarrassed that I have no idea what I’m talking about. I never know if I’m getting ripped off by someone who’s realized they’re dealing with a guy who doesn’t know the difference between an alternator and a radiator.

Do you ever get stuck seeing yourself and your life exclusively through the lens of that one big thing you’re bad at?

A while ago I was chatting with a young couple about their big thing: Credit card debt. They were feeling very defeated. Sad, scared, embarrassed, and most of all hopeless. They could have more than paid for a mortgage with their minimum monthly credit card payments. They were searching for options to pay it down quickly and avoid thousands upon thousands in interest payments for years and years, but so far everything had been a dead end. They said they thought about it all the time, and it was constantly weighing them down. It was starting to define their lives.

But this young couple was the sweetest couple you could meet. Their careers were off to a great start. They were stylish and funny. They clearly had the greatest friendship and partnership. In most ways, they were the couple everyone wants to be. All they could see, though, was their debt.

I think we forget sometimes–very often in fact–that there is so much more to life than the one big thing we’re bad at. So we’re insecure.

Maybe someone has massive debt that they can’t see past, always stressing them out. But maybe that same person has a fantastic career going, one they should be very proud of, and if they focused on that they’d feel confidence and hope.

Maybe someone else without much of a career–still delivering pizzas or washing dishes–maybe that someone is looking enviously and insecurely at that first person with the great career, thinking that if only they were so successful, they’d be happy. But maybe the delivery guy is also fit and athletic, playing sports with friends all summer, hitting the gym every night.

Someone else is watching the athletic guy, wishing they looked like him–that they weren’t overweight, wishing they could go running, or at least climb the stairs without feeling short of breath. They focus on their weight problem until it seems like the only thing in their life. But they’re forgetting they have a couple hard-earned degrees from prestigious universities–an education many people only dream of. They’re smart and well-read. They have a great understanding of politics and current events. They have ‘Harvard’ on their resume and an almost automatic leg up on their professional competition.

And there’s another person who can think of nothing but how badly he wants and needs that education. If only he had taken out the loans to go to school, life would be so much better now. He constantly regrets it and feels inferior to his professional peers. He dreads getting asked where he went to school. But maybe he’s taking for granted what a great family he has. He has a couple kiddos that think the world of him. He gets to come home every night to warm hugs and smiles. And maybe in reality, that can make him a lot happier than a degree.

And maybe there’s someone else who doesn’t have a family. She doesn’t fit in with her siblings and she isn’t respected by her parents. She’s had to move on, and she’s lonely. She sees happy families everywhere and it hurts her. But what if she chose to focus on what she’s good at–the great things in her life? Maybe she gets to go on adventures, exploring the great outdoors, traveling to beautiful cities and exotic mountains.

What’s the thing you’re bad at? What’s the sad thing in your life? What’s your big insecurity?

If you find yourself thinking about it constantly, defining yourself by your weakness–you’re not alone. So many of us naturally focus on the sad or bad thing about ourselves.

But there’s also always good stuff. Good stuff we may not be seeing, because we’re so distracted by the bad stuff.

When you’re feeling discouraged about who you’re not, try thinking about who you are instead. There’s amazing stuff there. 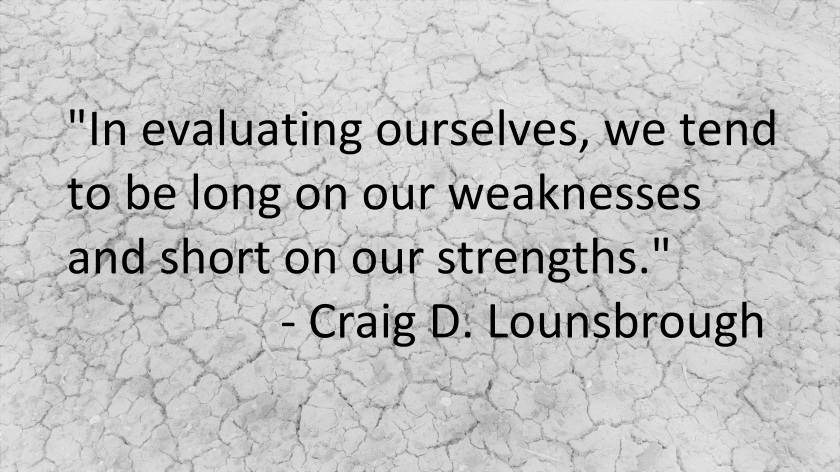 2 thoughts on “Everybody is bad at something”

I write about the weirdness of being human. I hope a few of my words help a few of your moments in this wonderful and confusing adventure we call life. We need each other.

Mental health is deeply important, and it's good for us to have open conversations about it. But I am not a therapist or a doctor--and you need both. I hope what I write complements the care and advice you get from licensed professionals, but never replaces it. Wishing you the best!